FUNCELL consists is the development of an innovative mycobased tertiary treatment for tannery and papermill wastewaters efficient in removing tannins and absorbable organic halogen (AOX), not depleted by consolidated bacterial based processes. The costs of treatments for m3 of wastewaters will be reduced and qualitative improvements in the treatment of wastewater are envisaged. FUNCELL is based both on modern processes for biological treatment (Moving Bed Biofilm Reactor, MBBR) and on biological nonconventional processes catalyzed by fungi [WhiteRotFungi (WRF) and Ascomycota (ASC)]. An innovative carrier, based on polyethylene supports, will be developed for optimizing the fungal biomass growth in system where bacteria are competitive. A pilot of an innovative MBBR designed for fungi will be set up and tested. An innovative approach to monitor and automatize the reactor, based on a specifically designed differential respirometer, will be constructed. The TRL 6 level will be reached. FUNCELL’s objective is the (15-20)% reduction of the investments in wastewater treatment plants, compared to actual technologies, comprising anaerobic treatments dedicated to the depletion of AOX.

Tannins and AOXs are keen to damages aquatic environments. More over they are produced by industrial activities that are highly water demanding. FUNCELL is oriented to create nonconventional processes performing better than the “best available technologies”, in the removal of both tannins and AOXs from the effluents and to promote the reuse of treated water and the adoption of a common policy involving both Romania and Italy in the fame of the Communitarian and National regulations.

The obtainment of a high quality effluents and effluents with a water quality suitable for reuse will be the two main needs addressed by FUNCELL. FUNCELL goals will be achieved by developing an MBBR treatment specifically designed for fungal metabolism, producing lower amount of sludges accompanied by a higher removal efficiency. The reutilization of the treated wastewater inside the services of the industrial plants will determine a decrease in the consumption of water in the same sectors. FUNCELL will determine a global decrease of the environmental footprint of tannery and paper industries.

Objective 1. Isolating a fungal bioactive consortium (bioactivetool). Utilizing cellulose as carbon source capable to transform, biodegrade and deplete tannins and AOXs. The capacity of the fungal candidates to exert their metabolic potential utilizing different substrates for growth, comprising cellulose, will be evaluated both in sterile and non-sterile conditions at bench scale.

Objective 2. For the scaling up of the experimentation, the selected fungal strain will be grown on innovative polyethylene carriers. The carrier will be designed to be exploited in a moving bed bioreactor and to favor fungal growth in the presence of competing bacteria.

Objective 3. Designing and testing a moving bed bioreactor capable of favoring the growth and metabolic activity of the bioactivetool by the exploitation of the innovative carrier in non-sterile conditions where bacteria are usually more competitive.

Objective 4. Designing and evaluating an innovative solution based on a differential respirometer to monitor, control and automatize the system. The technical objective of the project is to set up new advanced and intelligent processes with positive.

Project Budget as Mentioned in the Project Proposal

DFR Systems SRL, as the Coordinating Partner and will be responsible for the project management in accordance with the Manunet Guidelines. 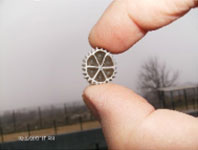 b) carrier with biofilm 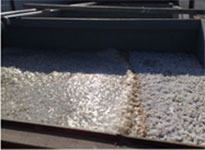 In MBBR systems the biofilm grows protected within small plastic carriers, which are carefully designed with high internal surface area. These biofilm carriers are suspended and mixed throughout the water phase. The biological wastewater treatment process consists of adding biofilm carriers in aerated or anoxic basins to support biofilm growth. When the microorganisms in the attached biological film die, the film breaks up and peels off from the solid support being carried away by the liquid current. The destroyed cellular material is removed as sludge.

Cerioporus squamosus is a basidiomycete bracket fungus (also known as dryad’s saddle or pheasant’s back mushroom) (Spahr, 2009), and has special importance in natural ecosystems, being able to degrade a wide range of cellulosic substrates. The strain develops Dimitic hyphae, which are composed of skeletal hyphae (axial or inflated) (Zmitrovich, 2016).

Fresh culture strain was started in Potato-Dextrose Nutrient Broth (Scharlau), for 4 days at 28°C, at fermenter level (Biotec FE 007), in a final volume of 500 mL, environmental volume for 72 hours at 28°C under aerobic conditions (continuous oxygenation) and agitation set to 250 rpm. 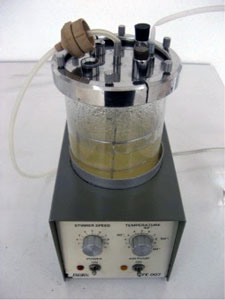 After strain growing, for 4 days at 28oC, MBBR pieces (previously sterilized at 121oC for 15’) were put in the fermenter, and the process was further continued for 7 days at 28oC. 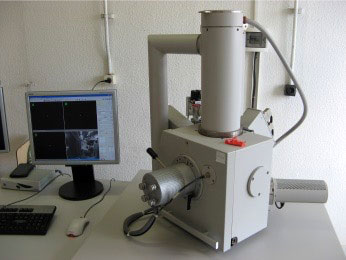 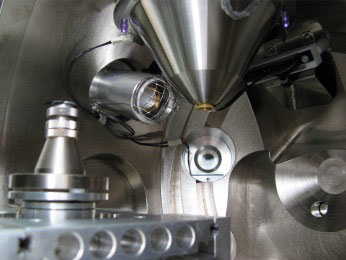 Optical microscopy analysis was carried out on an Olympus SZX7 stereomicroscope, with 7:1 zoom ratio, built-in electrostatic discharge protection, and advanced Galilean optical system for highly resolved images. Analyses were carried out at a magnification level of 0.8X, on both treated and untreated MBBRs.

Indigenous Ascomycota are the dominant fungal phylum in polluted environments, where they are able to transform or remove also significantly stable and toxic recalcitrants (Marco-Urrea et al., 2015). Polluted wastewaters represent a source of Ascomycota, putative degraders for which studies are surprisingly scarce. In this context, many unstudied fungal species need to be explored, to understand their specific interactions in engineered ecosystems, because they appear to play a primary role in actual polluted scenarios. Some Ascomycota undoubtedly possess great potential for bioremediation purposes (Mariner et al., 2008), and the key seems to be the intracellular enzymatic machinery coded in their genome, rather than the extracellular battery of oxidative enzymes already described for White Rot Fungi.

Optical microscopy analyses revealed Cerioporus squamosus biomass deposition inside the MBBR structure (b) when compared to untreated MBBR (a). 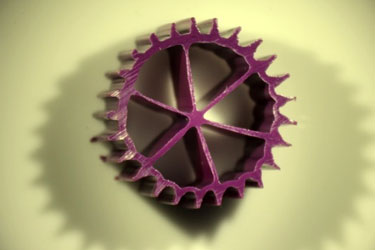 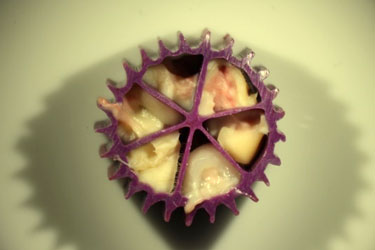 Analysis highlighted attachment of microbial biomass inside the MBBRs, but not on the external spaces of the polymeric structures. It can be highlighted that a longer process (more than 7 days) could translate into a higher quantity of biomass that will be internalized between the MBBRs empty spaces (inside the structure). Another aspect that was noted is that the biomass was not firmly attached by the polymer surface, and could be easily washed.

SEM analysis on Cerioporus squamosus standalone strain, grown on Sabouraud-Agar Petri plates, carried out at pressure levels between 200Pa and 208Pa highlighted a fibrillated, branched structure with a high degree of coverage on the carbon band and hyphae size ranging from 1.60μm to 2.72μm, for 4000x magnification analysis. The strain has a multi branches hyphae organization, these having dimensional width variations, and pyramidal structure in section (see below a SEM analysis of morphological characters for Cerioporus squamosum strain). 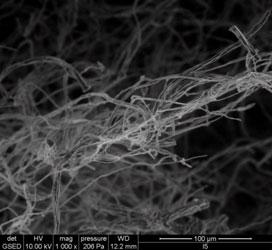 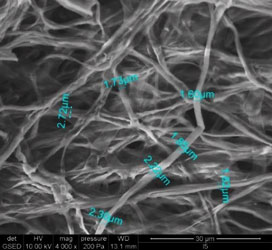 I. Papers published/accepted for publication